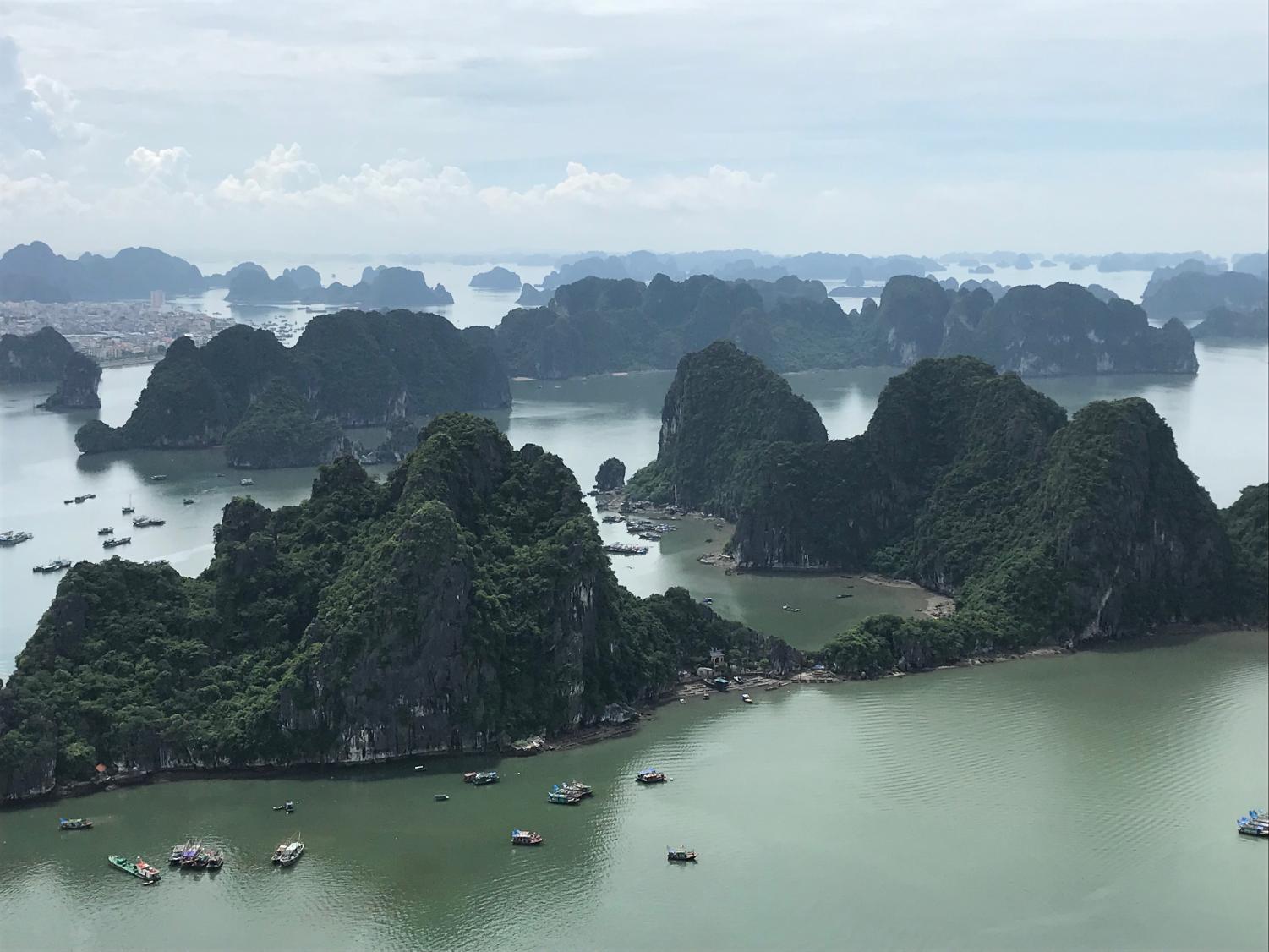 The Descent of the Dragon

Vietnamese folklore has it that to fight off enemies from the North, a mother dragon spewed emerald jewels which turned into the rocky formations which scatter the bay we see today. Now, she rests on the seafloor, the guardian of the bay.

My uncle first told me this story as I peered out the window of the bus as we stopped by Halong Bay before heading to Tien Yen, my grandmother’s hometown just two hours north. I was six then, and I remember marvelling at the litter of wooden boats which swamped the nearby dock, and wanting so so badly to go aboard one. Unlucky for me, it was just a pee and snack break, so I settled for the stories my uncles told of the wonders and secrets those limestone islands and clear waters held. Fast forward five years, I saw for myself why they call Halong Bay the Crown Jewel of Vietnam.

Prior to teaching at UNIS, Donna Frose visited Halong in the summer of 1998 with a colleague from her posting in Singapore. They stayed overnight at a simple hotel in the city and took a day tour of the bay, exploring the caves and limestone islands at their own pace.

“It was quiet and peaceful,” Frose said.

Frose often hears of the worsening state of Halong from fellow teachers and students, but she tries to preserve her memories, although admitting that “[she’s] sure that’s not how it’s described today.”

Halong Bay was awarded the UNESCO World Heritage Status in 1994 and subsequently in 2000, on criteria concerning its naturally-preserved beauty and importance for science. After its induction, Halong Bay rose to the forefront of the tourism industry in Vietnam, and the quiet city of Halong quickly transformed into a tourist hub to accommodate the increasing number of arrivals. The small city now brims with popup hotels, restaurants, and tourist centers. After sightseeing, tourists can leave the mainland and board cruise ships to explore the bay.

While the heritage status theoretically increases conservation efforts, opinions are mixed amongst tourists and locals about whether that is the reality at Halong Bay.

Mark Bowyer, founder of Rusty Compass, a reputable travel company in Cambodia and Vietnam, said that the Vietnamese government subsidizes the tourism industry as it is hugely profitable, but turns a blind eye to “the deteriorating state of the bay’s natural environment [and] the dodgy boat operators exploiting it.”

With close to 9 million international tourists visiting Halong yearly, and a 19.9% increase in total international tourist arrivals to Vietnam from 2017 to 2018, the numbers are likely to continue increasing. Increased arrivals bring in large revenue, and since much of the businesses are domestic, the money is poured directly back into the economy. Subsidizing the industry appears to be a smart move.

A quick search online about Halong elicits mixed reviews from TripAdvisor and multiple independent tourism websites which, for the majority, praise the pristine beauty of Halong, but criticize the lack of environmental care. However, Halong still holds a 4.5-star rating out of 5 on TripAdvisor, based on 9,981 reviews. Could the situation really be that bad?

During the summer before our senior year, Max Knight and Karan Jain accompanied me to Halong city to investigate. The expenses for the three of us totaled close to one and a half million VND. We conducted three interviews and rented two motorbikes for transportation, and although Karan wore his helmet backwards, we were able to navigate the busy streets without attracting too much attention. It was a thrilling and rewarding experience to say the least; besides the investigative work, we went to the beach, walked to a deserted night market, illegally hiked up a mountain in the sweltering heat, and got stranded on the road in torrential rain with a broken-down bike and only our memory to help us get back home. These adventures proved worth the three hour drive themselves. Nevertheless, we came to conduct interviews and that carried a thrill of its own.

Doan attributes the root cause of environmental degradation in the bay to a lack of support from the local and national government as they provide few resources to tackle these issues. He believes the locals are aware of the environmental problems but are unable to act upon them because environmental laws are loose; the tourism industry “does not obey the laws that do exist.”

A later interview with Dinh Van Cuong from the People’s Committee of Quang Ninh (the province where Halong is located), exposed much deeper problems.

Dinh cites fracking and coal mines as the primary cause of the environmental damage in Halong.

Fracking refers to the process of drilling into Earth’s surface using high pressure water, chemicals, and sand to extract gas and oil. The limestone rock formations in the bay are drilled for the gas and oil reserves, but much of this goes unseen to foreigners as fracking projects occur away from the main tourist areas. Similarly, coal mines are set around the vicinity of Halong in nearby Cam Pha and Hon Gai to avoid tarnishing the bay’s touristic value.

As 95% of coal production in Vietnam takes place in Quang Ninh province, it is difficult to reduce production as resources are abundant in this region, and the industry provides employment and capital for the local and national economy.

Still, the toxic discharge from the coal mines, such as coal ash and methane gas, present a serious threat to the bay. Coal ash typically contains traces of heavy metals and contaminants, which are powerful pollutants. The water then becomes dangerous for living organisms who depend on the water source, including humans. Methane gas is extremely harmful towards the climate as it is 84 times more potent than carbon dioxide. With no major plans to enforce more environmentally sustainable practices, I can’t help but worry that the government will only act when it is too late.

Damage caused by the coal and oil industries seem to foreshadow impending doom for the bay. Government intervention seems to be a viable option to keep these industries in check, but according to Dinh, there exists minimal communication between the local and national government.

A source who wishes to go unnamed claims that there have been talks of investments coming in from Japan. The source did not disclose exactly what form those investments would come in as, only that it is to help the sustainable initiatives in the tourism industry.

So some talks of environmental initiatives, but a negligence for the environment continues to plague the industries operating in Halong, and frankly, it doesn’t seem like the government gives a toss. During our downtime, Max, Karan, and I also went to the beach. After braving the cold water, we found ourselves in other company: a sunken tire, pellets, clumps of polystyrene, and general trash residue.

In the afternoon, we made our way across the colorful Bai Chay bridge. Sitting on the back of the motorbike while Karan drove, I marveled at Halong city’s impressive array of bright colors at nightfall. It was an incredible contrast: the shimmering lights which fight for your attention against the calm, dark waters of the bay.

Dinh believes the key to protecting the bay is collaboration among local and national governments and international organizations, and Doan believes education is the key. Both solutions stress the importance of effective and clear communication. So please remember this: that with education, you carry the responsibility to share and communicate.

All interviews were conducted in Vietnamese and translated by Rohan Gowda. Please email rgowda@unishanoi.org or visit tinyurl.com/HalongInterview if you would like access to the interview files.