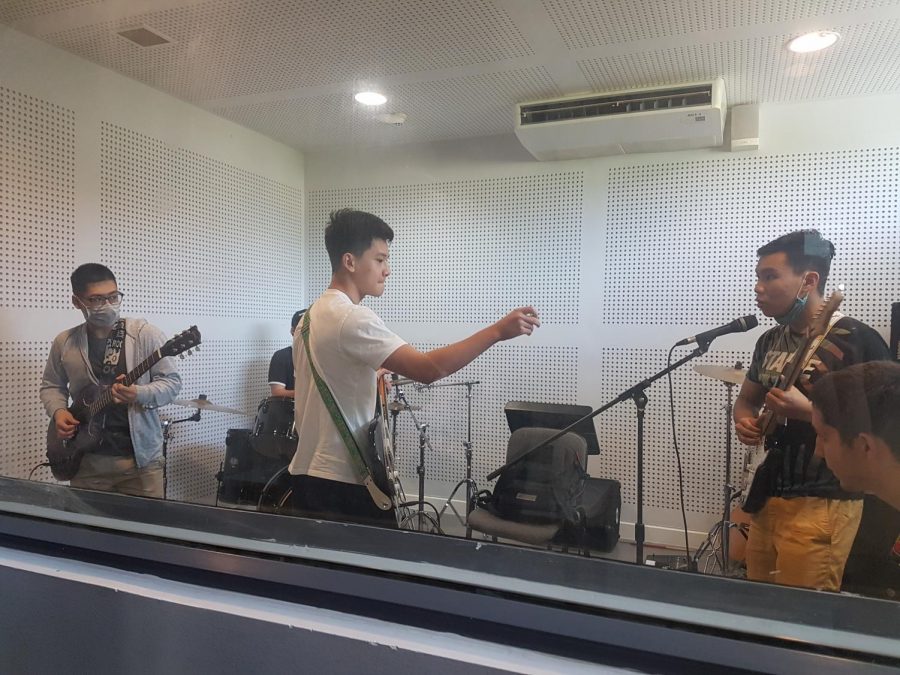 Nayomaze rehearsing in the recording studio.

Last June, as the school year ended, the high school bid farewell to three student bands: Midday Moonrise, Avenue V, and The Gypsy Schoolgirls. Hope for revival in the UNIS music scene seemed unlikely. However, this year there is a new band making an appearance: Nayomaze.

The name Nayomaze — coined by Guillaume — is a play-on-words of mayonnaise, his favorite condiment. It is pronounced “Nay-Oh-Maze”, but Knaggs prefers to pronounce it “Nay-oh-mah-zi”.

“It was a long process of actually deciding [on] decent names,” Bao Chau Nguyen said. “Finally, when we came across Nayomaze everyone in the band was like, ‘Yes, this is the name’.”

Most of the band’s members come from Midday Moonrise. However, there have been a few who decided to not join Nayomaze this year — posing a challenge to the instrumental organization. “We have to think about how each member plays a role, in terms of layering-wise and the amount of instruments we had,” Bao Chau Nguyen said.

Grade 12 student Felix Shum, a former guitarist for Midday Moonrise, decided to leave the band because of his school work. “Work just got a little overwhelming and I needed to prioritize everything,” Shum said. “I still love every single member of the band and I wish them good luck for their adventures. It’s just not for me.”

Bao Chau Nguyen noted that the loss of band members was disheartening. “It’s sad to see them go but we will always be open to playing with them,” Nguyen said.

Huy Nguyen was a member of the High School assembly band Avenue V.  Working with new bandmates was an interesting experience for him. “Last year it was more of a Grade 11 band, but now there are some Grade 12s and Grade 11s,” Nguyen said. “It’s a little bit overwhelming for me because I need to get to know more people.”

On the other hand, Guillaume, who was previously in The Gypsy Schoolgirls, said that he did not feel that it was strange. “It’s not weird, it’s normal for drummers to switch from band to band,” Guillaume said.

The band’s genre of music is best described as “indie-pop and a little bit of indie-rock,” by Huy Nguyen. Their original songs are created by first brainstorming ideas together, testing them in the studio, and then layering different melodies, harmonies, rhythms, and lyrics.

Landini added that, “Bao writes the lyrics and chord progressions, and then I listen to it and play around with my bass and then it kind of just comes to me.”

With the complications that came with COVID-19 safety measures, Nayomaze had been struggling to determine their ideal debut. “We wanted to debut through a live performance where people could see us playing in real time, not just through a recording”, Bao Chau Nguyen said. The band recently performed to a small group of Grade 11 and 12 students and some teachers during lunch in the theatre.

Student-led projects like Nayomaze at UNIS support independent pursuits of artistic expression, driven by student initiative and passion. The group continues to rehearse their music every Wednesday afternoon for future performances.