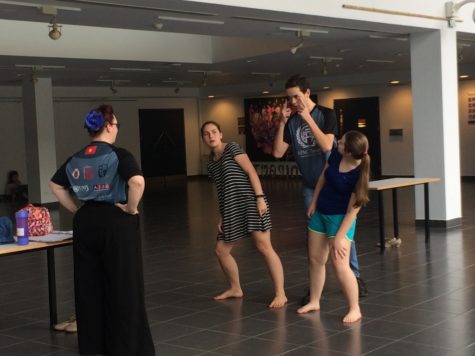 There are many extra-curricular activities available at UNIS. The HS musical is one activity that combines a diverse set of skills into one. A huge production is at hand which requires numerous amounts of rehearsals to perfect. This year, the HS musical will be ‘Once Upon a Mattress’, following the HS play ‘The Seussification of a Midsummer’s Night Dream’. The talent of the amazing, fresh new cast and the artistic vision that Ms Twynam-Perkins instils in the cast are what makes these plays fresh and new.

Here are a few words from the director herself, stating why the musical is such an unmissable show: “This year the spring musical takes us back to the golden age of musical theatre with a whimsical retelling of the ‘Princess and the Pea’. The cast, crew, and band that have assembled and really illustrated the strength and depth of the creative, musical and theatrical talent at the school.  It will be a fun evening entertainment for all the family.”

As the conversation delved deeper into the real meaning of theatre and what the play does for the UNIS community, I also asked what can it also be for young, new talents within the school. “When working with youth in a theatre setting I have two main focuses. I see production as an opportunity for students to further develop and apply the skills they learn from drama classes in a realistic environment. Firstly, I focus on getting the show blocked and rehearsed to a standard that is ready for performance. It is important for students who are wishing to be involved with a production of any kind to realise that yes it is fun, but the fun is a payoff for all the hard work and discipline they need. Secondly, I focus on building rehearsal and performance skills in all the students involved. From basic skills such as making sure you cheat out when on stage for some of the newer students to production or specific character development and acting skills for the more experienced students.”

Finally, I asked what Ms Twynam-Perkins would hope the experience would be for the audience of the show and what it could do for them, and her final response was: “I hope the production of ‘Once Upon a Mattress’ captures the fun of the characters, the pure enjoyment of the performers, and mostly that it gives the audience hours of where they can just relax and enjoy the show without the need to be connected to the outside world. I want them to get caught up in the fun and frivolity of this well known and loved fairytale.”

The most exciting part of theatre within the school community is the bond created between the students and to share that with others who share similar interests is always a cherished experience. Within the cast, I have asked the young fresh star of the play, Bea Campilan, the young and comedic talent of Max Knight, and the thriving theatre lover, Kathleen Sharman, their thoughts on this experience.

Bea: “The costumes this year are pretty cool and the fact that everyone will be dancing in heels, while terrifying, is exciting. Even though the cast is not as big as previous musicals, I feel like this year’s musical will be just as good as before. As Winnifred, I’m most excited about getting to sleep in the bed. I’m not that great with heights, but I’ve never had to climb tall structures for a role before. She’s also such an extravagant, loud, unexpected “princess” that every time I read her lines, I feel like I could always give more energy. It’s such a great role to play because I can go crazy and people would probably think it’s just a part of her character.”

Max: “Looking forward to that scene in which Bea goes to bed while Maia sings – it has a nice atmosphere. I’m excited to play the mute king, as he is mute, and hopefully to be a role model to people who are mute.”

Kate: “Everyone should look forward to this musical because it’s nothing like you’ve ever seen before. Taking a classic fairy tale and putting such a fun twist. It leaves fresh and new feeling. It’s one of those shows that you need to come in knowing to expect the unexpected. I’m very excited because this is my first musical at UNIS, and I get to spend my time playing the character of Minstrel, a fun-loving medieval musician with a huge heart who wants the best for everyone. Getting to bring this character to life is a lot of fun, especially because this role pushes me in both my acting and singing. I love a challenge.”

With the inside scoop on what UNIS talent is working hard to bring you, please come and support by watching the play and sharing the experience!