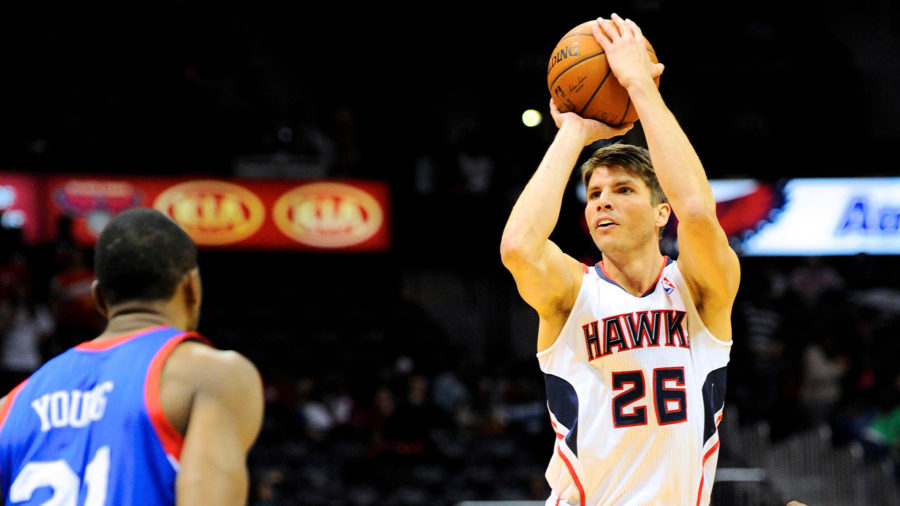 It’s the middle of the 2016-2017 NBA season and the Cleveland Cavaliers have just added Kyle Korver, a shooting guard from the Atlanta Hawks, to the roster. Having regular starter JR Smith out with a thumb injury for two and a half months hasn’t helped calm the Cavaliers either (Withers). This period of crisis was compounded among the fans as the number one rival, the Golden State Warriors acquired Kevin Durant, arguably one of the best players in the league, making them a team stronger than they already were. The Golden State Warriors and the Cleveland Cavaliers are predicted to match up in the NBA Finals for the third year in a row. However, with the loss of JR Smith, they needed a contingency plan in case JR Smith doesn’t make the return in time.

Kyle Korver was the starting shooting guard for the Atlanta Hawks and provided a great offensive threat with his ability to spread the floor. His signature move, or the type of shots he would take for the Hawks, was coming off a screen circling on the 3-point line to then receive a pass into a shot. This is probably the hardest of shots to take as the setup is fast paced and the shot is typically a moving shot which makes it hard to aim. This didn’t stop Korver as 64% of his shots so far this season has been from downtown (Elias). Kyle Korver to this date has played three games off the bench so far for the Cavaliers. The Cavaliers, contrary to the Hawks, are significantly better and their halfcourt offensive set is more sophisticated allowing a lot of players on the Cavs to shoot 3’s. This made is easier for Korver to take shots as the play style was more open as opposed to the play style with the Hawks.

There have been interviews and discussions with players like LeBron James and Stephen Curry about how Kyle Korver would affect the Cavaliers. “ [Kyle Korver] adds another dynamic piece to the team. Hell of a sharpshooter, and a great guy,” said LeBron James in an interview (Hirsohn). Kevin Love, power forward of the Cleveland Cavaliers, added, “A great piece for us,” (Hirsohn).

Korver’s first game’s stats were 2 points and 3 rebounds, and in his second game, he accumulated 2 points, 2 rebounds, and 1 assist. While these stats don’t jump off the page, it is important to note that he is coming off of the bench, playing very few minutes, and is unfamiliar with the Cavalier play style. These stats did improve in his third game however with 18 points, 5 rebounds, 2 assists and 2 steals.

The addition of Kyle Korver will benefit the Cavaliers and fans are surely going to love him in the future especially against top rivals like Golden State.