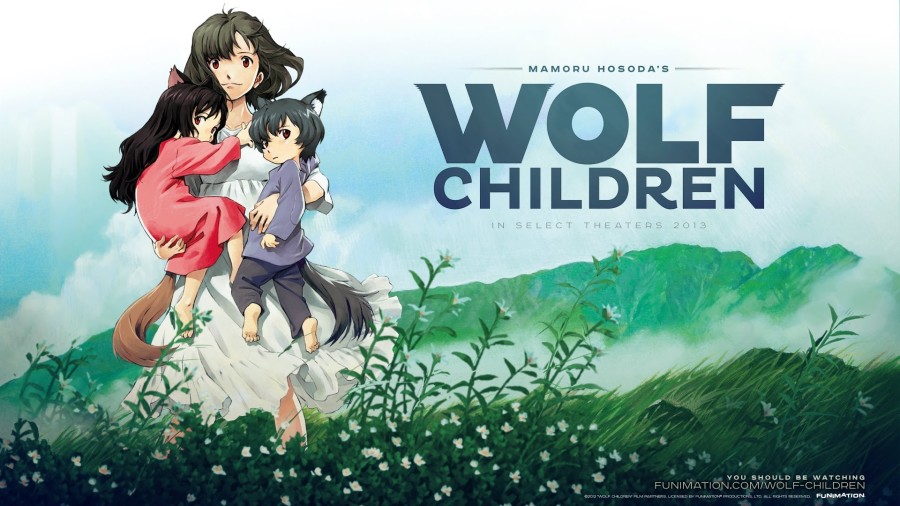 “Wolf Children”, a 2013 film by Japanese director Mamoru Husoda, tells a story of love and acceptance of two siblings, Ame and Yuki, and their mother Hana. The story starts by introducing the mother, Hana, who is shown as a college student who notices a mysterious man who she has never seen before attending class. When she talks to him, she finds out that he isn’t supposed to be there. After a while, they become friends one day, the man reveals to her that he is a half-man and half-wolf. They decide to start a relationship together and Hana eventually gives birth to their children Ame and Yuki. However, not long after she gives birth, the father goes missing. Soon after, he is found dead on the streets, yet Hana cannot mention that he is her husband because it would reveal the secret of him being half man half wolf. Nothing exactly is mentioned about what happened, but Hana implied that her husband was driven by his wolf instincts to hunt for food for their children, leading to him being killed in a car accident, leaving Hana to take care of their children herself. After discovering the troubles of living in a city with children that are both wolf and human, she decides to move to the countryside where they can live in peace.

Ame, Yuki and Hana are some of the most memorable and wonderful characters in anime. At the start of the series, Ame is shown to be shy and reserved, whereas Yuki also seems happy and enthusiastic. Yuki is also shown as a person who loves the outdoors as well, something that Ame doesn’t particularly like. Over the course of the story, we see them become the opposites of each other. Before, Ame was shy and unadventurous, whereas Yuki was wild and filled with energy. This was an interesting yet wonderful dynamic between these two characters. Of course we cannot leave out our loving mother Hana; just seeing her work tirelessly to care for her children out of love and never uttering a word of complaint or a sense of hatred for husband is incredibly heart-warming. I look up to her with a sense of admiration at her determination and love for her children.

Speaking of love, this movie also shows us the importance of family. Throughout the film, we see the wonderful family supporting each other and how they are always there for each other. They face the hardships in life together and enjoy many memorable happy moments together. It shows us that despite being outcasts and different in society, it is their difference that makes them more beautiful than anyone else.

Conversely, the film also shows us how inconsiderate people can be when it comes to being different. When they are all living in the city, Hana faced various problems from other people like the neighbors complaining that there was a howling sound in the middle of the night. While that may sound comedic, it is a huge problem for our characters. In such a world where many frown upon the notion of being different, they are the ones that stand out but have to hide their identity from the world. However, we are shown how these characters live their lives and how despite being different from everyone else and having to hide who they are, they still manage to find their place in the world and are able to live a happy life.

Usually, I don’t give any comments about the animations in films as I know very little about art. However, it doesn’t take a genius to appreciate the art and animation of this movie. The backgrounds, the characters and the visual details of the film are wonderful and really brought everything to life. The film was directed by Mamoru Hosoda, the creative genius behind other fantastic movies such as “The Girl Who Leapt through Time,” “Summer Wars,” and “The Boy and The Beast.” The film was animated by Studio Chizu, a realtively new animation studio formed by Hosoda to produce his films, and Studio Madhouse, which had produced Hosoda’s previous films and done countless other animated works such as “Tokyo Godfathers”, “Redline” and “Perfect Blue”.

When people think of this movie, the “Wolf Children,” they usually think of that short and sweet story that moved their hearts more than most animated films could. They associate the film with a mixture of emotions, and these emotions change as we see our main characters find themselves in different situations where they develop and renew themselves throughout the story. But none can deny that they weren’t satisfied and felt truly happy that the characters finally manage to find their place in the world. “Wolf Children” is a incredibly film experience and one that can be enjoyed and appreciated by people of all ages. Whether you are a child, an adult, or even a grandparent, you can be sure to enjoy this anime masterpiece.