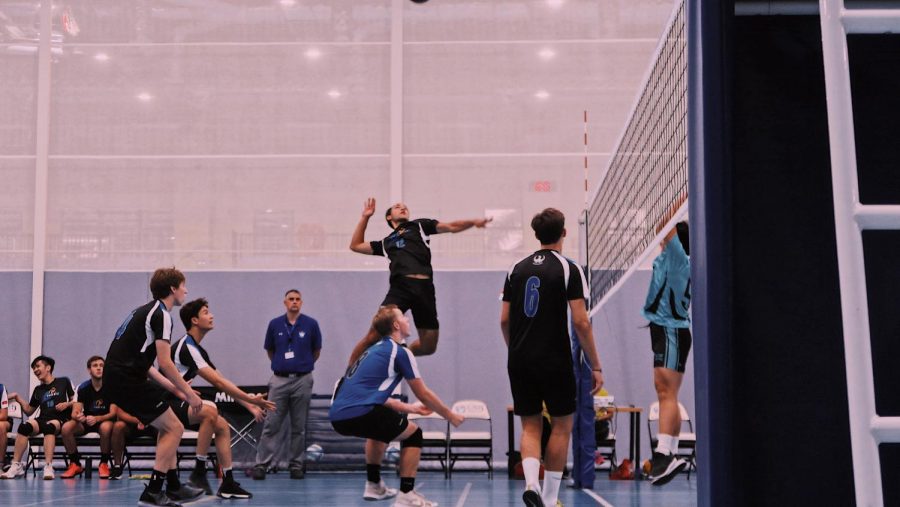 For the first time in UNIS history, the APAC boys volleyball team have brought home the gold! This year they placed first, despite placing 11th out of 12 at super APAC last year. This year’s APAC happened on the 18-20th of October at Seoul Foreign School (SFS) in South Korea.

In the finals, the boys team played against Western Academy of Beijing (WAB), winning 3-1 sets. The final set was very close, with the score being 26-24.

Volleyball player and Grade 10 student Jacob Biros, described the emotions he felt when his team won.

“That rush of when we got the point, seeing everyone tearing up, it was such a cool moment that I would do anything to relive,” he said.

In the 4th set (their winning set), WAB won the first point. This did not stop UNIS and they began to lead the scoreboard, winning 7-3 and prompting WAB to call a timeout. The teams were neck and neck from this point until the score was 13-14 to WAB. Kevin Gibney, the left wing spiker, scored 3 points in a row, bringing the score to 16-14 for UNIS. WAB then gained momentum but was stopped when UNIS called a time out and came back to tie the game at 24-24. Lenny El-Hage pushed UNIS ahead after scoring another point with a powerful spike. Charlie Wood made the last serve of the day, and UNIS won the final point from an over-set by WAB.

“[That] was when we realized we could actually win this championship,” he said. Gowda could only describe the atmosphere during those final moments as “amazing.”

“Whenever UNIS [students] talk about APAC, we always mention how bad we are, or how we are the underdogs and that we are not good enough for APAC,” said Grade 11 student Hoai Co May Nguyen, a player from the girls team. “After this event, I think that all the athletes from UNIS will start changing their mindsets and believe that ‘we can compete in APAC’.”

In preparation for APAC, coach Keri Giller organised more “open court” training for the team at the end of the last school year and the beginning of this school year. Coach Tarique AL-Lesa also organized for David McKenzie, an American volleyball player who played for the United States at the 2012 Summer Olympics, to train with the team and focus on developing fundamental skills.

Grade 11 student Richard Dang explained why the tournament this year might have been different from previous years.

“Everyone in the back of their mind, had a voice saying ‘we are going to win this year.’ Obviously every year we say that, but this year, we actually meant it,” Dang said.

The boys volleyball team was not the only team that went on APAC.

The volleyball girls team won their final game at APAC against WAB and placed 5th overall.

Nguyen talked about how proud she was of her team after their win against WAB. The team went from winning only one set last year to taking all the games to the third set this year in the round robin games, and even the fifth set in quarter finals.

“Next year, we will continue building upon the momentum that the seniors left behind,” Nguyen said.

Although Nguyen thought the placement during the tournament did not reflect the hard work that the girls team had put in, she knew that everyone on the team understood how far they came this year.