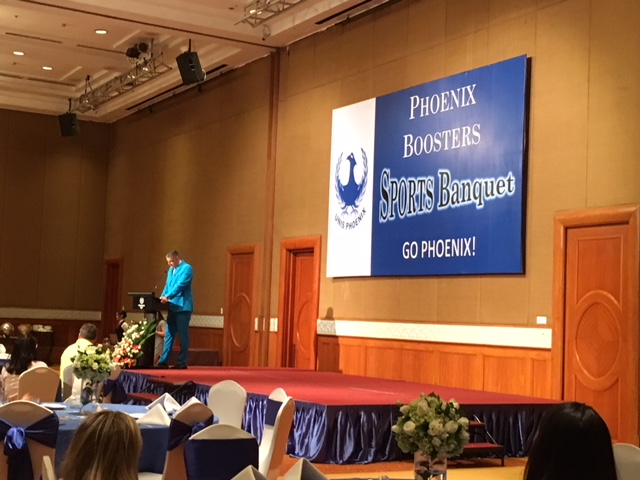 This year’s UNIS sports season came to a close at the high school sports banquet on Wednesday, May 23rd. The event was an opportunity to celebrate the efforts of athletes and coaches from across the school’s sports program.

Student athletes, coaches, and administrators gathered at the Sheraton for the event.

“You would think that the sports banquet is more about the athletes themselves, but it’s so much more than that–it’s about the community,” said Thanh Le, a grade eleven student athlete.

When the awards program began, each of the high school sports teams was called onto the stage, where team captains spoke about their team’s season and the coaches presented the MVP and player’s choice awards.

According to Activities Director Tarique Al-lesa, this student-led format was chosen for a reason.

“We wanted it to come from the students,” Al-lesa said.

For Al-lesa, the sports banquet is an opportunity to thank the athletes for their contribution to the UNIS community.

Before the first formal sports banquet was organized in 2016, there was an end-of-year celebration in the UNIS theatre. Parents and administrators recognized a need for a bigger celebration of the athletes’ commitment, and formed the Booster Committee, which funds and organizes the sports banquet.

To further the sports program, the Activities Office has been working to provide athletes with opportunities to improve their performance. At the beginning of the year, Greg Dale, a professor of Sports Psychology and Sports Ethics at Duke University, came to UNIS to help athletes develop positive mentalities. The Activities Office has also sent teams to more competitive tournaments outside of Hanoi to prepare them for the level of competition at APAC.

This year, there has been a push to provide more training outside of regular APAC seasons.

The sports banquet is also an opportunity for athletes to reflect on their season. Looking back, many of the sports teams improved their programs this year, either winning more games or playing games with closer scores.

Even though they came fifth out of six schools at APAC, the girls’ football team noticed a shift in how other teams viewed them.

“UNIS does have that rep[utation] of like, ‘they’re an easy win,’ but I feel like this year we really changed it,” said grade nine football player Frances Phan.

Le, who also plays football, said, “I think [the other teams] really respected us and knew that we should have been at least third or fourth.”

This may be representative of an overall development in sports culture at UNIS.