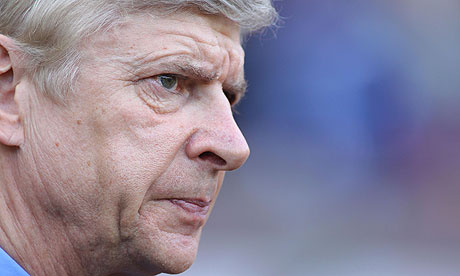 Pic.3: The meditative face of Wenger when Arsenal got in the “Death table”

On 29 August, 2013, the attention of the whole word of football drew to Grimaldi, Monaco. It is the Group Stage Drawing ceremony of UEFA to determine the group tables for UEFA Champions League season 2013-2014. Participating in the ceremony are many famous characters of the football world. We can list out here Michael Owen, Laurent Blanc, Luis Figo…

The ceremony started at 15h45’ (GMT). Based on the results of the most recent seasons, UEFA divided 32 teams into 4 different pots, each pot encompasses 8 teams.

Traditionally, pot A contained the teams which have the best results and evidently these teams are often stronger than the rest. However, this year, we have 2 interesting variables which are Benfica and Porto. These two teams don’t have superstars in their squad yet their results in European arena are really admirable. In 2004, Porto won the Champion League title in the surprise of many people, including the football experts. As for Benfica, last year, they got into the final round of Europa League before being defeated by Rafael Benitez’s Chelsea. Just by looking at the accomplishment, Benfica and Porto are actually two formidable opponents to any team in the League. Let’s see which team can decrypt these two mystery variables. According UEFA’s rule, the members of 8 tables from A to H will be drawn from these 4 pots so that two teams in the same pot cannot appear in the same group table. Each table then will be divided into two smaller groups so that the teams coming from the same National League won’t have to play on the same day which avoids the conflict in broadcasting rights.

After two hours waiting in stressful atmosphere, finally, the representative of each team had known their rivals in the stage group round:

Among 8 group tables, Group F is probably the toughest one because the each team has the same potential. Of course, the chance of stepping into the next round still leans toward Arsenal and Dortmund because they have some word-class players in squad such as: Santi Carzola, Theo Walcot, Robert Lewandowski or Marco Reus. But don’t forget that Marseille’s already won the league title in 1992-1993. Even if its squad was debilitated significantly because of the leavings of many good players; Marseille is still a threat to the other teams in the group. Napoli also can’t be underestimated; especially after its magnificent investment on transfer market.

Perhaps, Manchester United fans will have right to be jubilant because their team just fell into a comfortable group with feeble opponents like: Shakhtar Donetsk or Leverkusen. Nevertheless, to the new manager of Manchester United, David Moyes, this is the first time he coached in a big tournament like the Champion League. Besides that, Manchester United also didn’t operate avidly on the pre-season transfer market. The only one contract they signed at the very end of the transfer market was Marouane Fellaini who also never played in the Champion League before. After the retirement of Sir Alex Feguson, Manchester United is in the greatest devolution ever in its history with a lot of problems in and outside the pitch. Will the “underdogs” be able to utilize this chance to create a shaking revelation for group A? Let’s see.

In the other groups, the stronger teams like Real Madrid, Bayern Munich are all predicted to get the tickets into the knock-out phase easily if they played in their true form. However, soccer is an unpredictable sport and be ready for any interesting phenomenon coming from the underdogs.

At the end of the ceremony, the organizers also announced the winner of the European Footballer of the Year Award. With his impressive performance in the last season, Franck Ribery excellently surpassed the other two redoubtable candidates – Cristiano Ronaldo and Lionel Messi with a dominant voting rate and first time got this precious award.