Insurgency: A Game with a Good Mix of Realism 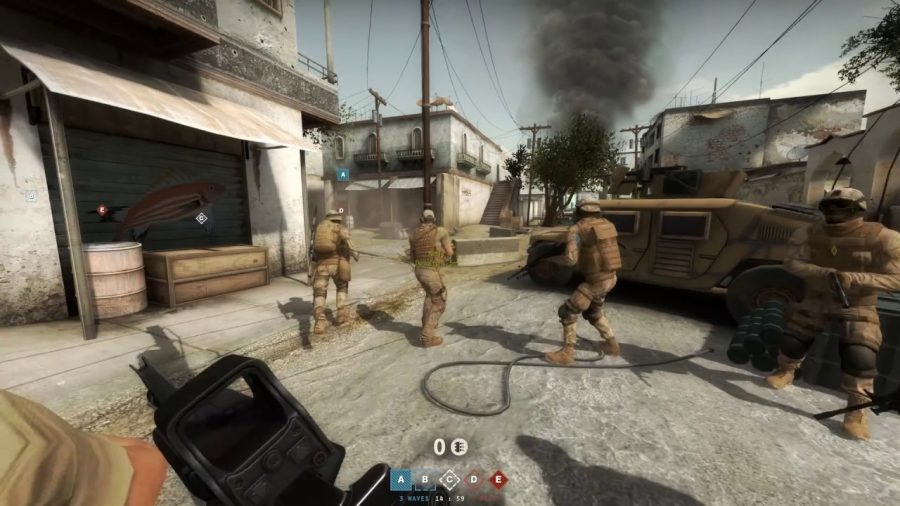 There are many FPS franchises in the world, and to compete with each other, they have to set themselves apart from others in order to get people’s attention. There was one such game that caught my attention, as it was on sale for 90% off despite receiving a rating of 9/10 on Steam. At first, I was doubtful, because from my past experiences a cheap price does not often come with good quality. But, considering Steam has a refund policy, I decided to spend my precious 10 bucks on “Insurgency”.

So is this game worth buying? Well, as I mentioned, developers are trying to make their games stand out, and Insurgency has done this by applying something called ‘realism’ to its game, which works as a double-edged sword. Let me explain how realism has influenced this game, and what are the pros and cons of it.

Essentially, there are two teams: Insurgent and Security force. Unlike other FPS games, where the difference is just in the team name, Insurgent and Security forces each have pros and cons. If you play on the Security Force team, you will have more options for weapon modifications and free access to light chest armor. However, weapons will cost more points, which I will explain later on, and armor piercing rounds are more expensive. If you are on the Insurgent team, your weapons, including armor-piercing rounds, will be cheaper, but you will have to spend more points on armor. Therefore, your preference of team would be more based on your playstyle.

The weapon and class system is my favourite and one of the most realistic parts of the game. Each team has a variety of classes, and each class has a unique role and arsenal. For example, recon and sniper classes are be supplied with sniper rifles and marksman rifles, while the supporter class is armed with light machine guns. In other FPS games, you spray your weapon in full auto until your enemy dies, but that’s the easiest to kill yourself in Insurgency. You expose yourself to the entire enemy team, and you may also be kicked out from the game because you are likely to kill your team with the uncontrollable recoil. If you do, you better quickly say that you are new to this game in the chat or there will be a headshot coming in your way very soon. In Insurgency, you and your enemy will go down in one headshot, regardless of the type of weapon, or after 3-5 shots to the body depending on what type of weapon are you using. So careful bursts or single shots are the best options when engaging the enemy.

In the game, there is a credit system where you are provided with a certain amount of credits to select your weapon, weapon mods, armor, and other gadgets such as explosives, explosives, explosives, and most importantly, explosives. Explosives such as grenades cost lots of credit, but they are huge game changers as one good throw can wipe out an entire enemy squad. Each team is provided with a certain amount of credit depending on whether they won or lost in the previous round. The credit can be used on more weapon modification meaning you can get more attachment on your weapon, like the extended magazine, vertical grip, holosight etc. or to upgrade a gadget that leads to other pros of this game which is balancing issue.

As I mentioned above, the credit system can lead to unfair competition as the match goes on, however, there is another system to balance out the credit system, which is the weight system. Depending on their credit cost, performance, and modifications, weapons have different weights, with more powerful weapons having a higher weight, which slows you down more, which means that enemies can spot you more easily, and can shot you down more easily since you are slower than other teammates. This can be critical in situations such as getting hit by one shot in anywhere is borderline between life and death.

While Insurgency managed to make its own distinction by incorporating realism, there is one huge disadvantage that makes this game a no-go for lots of people, and it is realism. As mentioned above, realism works as a double-edged sword. While the game provides unique experiences by applying realism, it comes with something called high entrance level. I would consider myself a hardcore, if not decent, FPS gamer, since FPS was the one genre that brought me to the world of gaming and has been my favourite genre of gaming for last few years. Whenever I play new FPS games, I have some confidence on my survival and aiming skill, so I thought the same about Insurgency, until I spent first 2 hours getting killed by the enemy no matter what I did. There are some frustrating features in Insurgency caused by the implementation of realism into this game.

One of the said features was the lack of HUD information. When you think of a typical FPS game, you would think of a screen showing your gun, crosshairs, health, ammo, and kill log. Well, thanks to realism, none of that is present in the game. Your character is going to die in 2 to 5 shots, and you or your team need to confirm kill if you feel like you managed to kill someone, and sometimes that can be ended up being your teammate. However, if you spend a considerable amount of time – 6 hours in my case – you will start to learn about the game, and as time goes on, you will start seeing yourself John Wicking your way through enemies with your pistol.

The second problem that this game faces is its ‘disturbing’ players. Since the game relies heavily on teamwork for success, communicating with your teammate is necessary for almost every round, and sometimes that is the hardest part. There are multiple obstacles that prevent you from communicating with other players, such as language barriers, language barriers, and last but not least, language barriers. However, these are problems you can encounter not only when playing Insurgency but also with lots of online multiplayer games, so having your friend play with you can be an effective solution. If you don’t have one, fear not; you can succeed with some trial and error.

In conclusion, Insurgency is a unique FPS game that incorporates realism to provide multiple unique and enjoyable experiences. However, it’s difficult to get started and it requires a lot of teamwork to be successful, which can be difficult. Would I recommend this game? Well, it would be really depending on the situation. If FPS is not your forte then go ahead and try some other game, but if you are a dedicated fan of FPS games, and looking for some new experience and challenges, go ahead and buy the game. If you ended up liking it, you can try the upcoming sequel “Insurgency: Sandstorm”.