Since its conception in 1988, UNIS Hanoi has undergone drastic changes to its facilities, including an entire shift in campus location. This commitment to development has continued with the school’s Master Plan, the additional phases of which have recently been unveiled to the community.

The first newly-released stage in campus development, Phase 3E, involves the demolition of the Early Childhood Centre, the elementary school building, B5, B6, the arts centre, the administration building, the sports centre, and all existing canteens.

In a recent statement, school administration announced that the campus would be closing for the 2019-20 school year to accelerate these construction efforts. In the unlikely event that development falls behind schedule, the closure will continue indefinitely.

The operations team has devised a way to keep students occupied and happy during the interim. “We call it ‘Fence Fun’,” explained one of the team. “With all of the fencing we’re going to reintroduce around the school, we’ve decided to create a labyrinth for the students. Weekday sessions will begin at 8:10, and they’ll have to navigate their way out before the labyrinth closes at 3:25.”

In a test run for Fence Fun, one ES student was declared missing. At various locations on the fence, the words ‘Help me’ were found scrawled in yellow crayon. A six-month project has been funded by the administration to replace the vandalised fences.

One student was very pleased following her trial of Fence Fun. “So far this year, I’ve felt really vulnerable and uncomfortable without the heavy fencing,” she said. “I’m happy that it’ll be back soon. It gives me a sense of security.”

The construction of a new canteen is a major component of the subsequent Phase 3G. The kitchen is projected to be seven times the size of the previous kitchen, equipped with an extensive collection of rice cookers. School administration has deemed that the larger kitchen size warrants a new caterer; a five-year contract has been signed with McDonalds.

Another goal in Phase 3G is the introduction of an on-campus Apple store, following the recent UNIS-Apple partnership. Students are encouraged to take advantage of the store to support the Bring Your Own Device initiative. 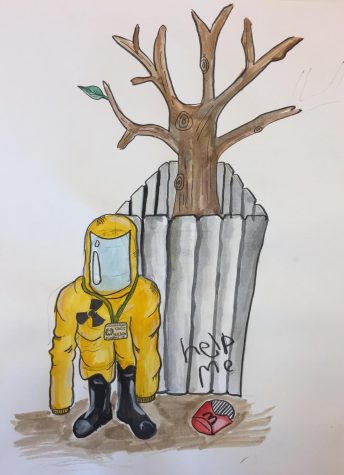 Phase 3H involves the construction of a Dress Code Task Force Operations Centre, which will be equipped with thermal-imaging cameras and a wardrobe of hazmat suits.

Under this phase’s enhanced safety precautions, guards will patrol campus and request students to show identification. Any student who fails to produce their school ID card will be held indefinitely in the new on-campus correctional facility.

The new Master Plan culminates in Phase 3X, with a projected completion date of summer 2065. Detailed costs and timelines, however, will be determined on an ‘as-we-go’ basis, at the discretion of the construction contractor. Phase 3X will see the erection of eight kilometres of fencing to facilitate UNIS’s exciting Phase 4 of construction.