How will Trump’s Presidency affect Science? 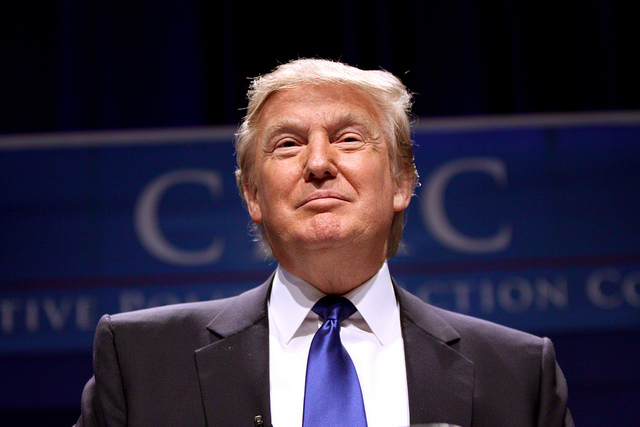 Scientists express concerns regarding how Trump’s policies might affect science and technology. Will they boost or limit these fields? (“Donald Trump” by Gage Skidmore is licensed under CC BY-SA 2.0)

Donald Trump is now America’s next president, a shocking conclusion to an extended and contentious campaign. Now, many scientists from the research community are contemplating the possible effects of Trump’s administration – and the prospects do not look good.

“Trump will be the first anti-science president we have ever had,” says Michael Lubell, director of public affairs for the American Physical Society in Washington, DC. “The consequences are going to be very, very severe” (Nature).
Climate Change
The primary concern amongst scientists is Trump’s stance on climate change. In his first major speech on energy policy, as a Republican presidential candidate, Donald Trump vowed that he would “cancel” the Paris climate deal. The Paris Climate agreement is the United Nations deal to curb the emission of greenhouse gases and to fund adaptations to climate change. Many scientists view Trump’s presidency as the end to this global policy.

In Scientific American, Michael Mann, an atmospheric scientist at Pennsylvania State University summarized the issue as such:

Not only would this agenda be disastrous for climate, it would actually undermine Trump’s ability to achieve his own primary goals. First, climate change is not like other issues that can be postponed from one year to the next. The U.S. and world are already behind; speed is of the essence, because climate change and its impacts are coming sooner and with greater ferocity than anticipated. This year, 2016, will be the hottest on record by a large margin, and 2015 and 2014 had set the previous records. Extreme weather events such as heat waves and heavy downpours are becoming more frequent and severe, as are related fires, droughts and floods.

The Paris agreement represents more than a legal contract binding 197 participating nations. According to Robert Kopp, Rutgers University Climate Scientist, “it’s a framework for countries to report on their climate change goals.” For instance, “China, which is responsible for a quarter of global greenhouse gas emissions, has a strong incentive to continue based on public health co-benefits.” Statistics indicate that China’s pollution results in 1.2 million premature deaths per year, causing 10-13% drop in their GDP. This cost outweighs the price of cutting greenhouse gases.

Every minute counts in the global struggle to curb greenhouse gas emissions. Global warming and rising waters will elevate coastal flooding and cover land on which more than 20 million Americans reside. Trump’s current stance on this topic remains a severe issue for the scientific world, and at this point, Trump’s administration looks less that favourable.
Funding for Research
The Majority of academic research organizations depend heavily on government grants. Such institutes include the National Institutes of Health (NIH) and the National Science Foundation.

Trump has pledged to cut federal spending; however, he has not elaborated on how this will affect the scientific research sector.

Last year, Trump was reported radio host Michael Savage, “I hear so much about NIH, and it’s terrible.”

According to Meghan Duffy, a disease ecologist at the University of Michigan, “I know a lot of people who are earlier in their careers and are really worried about what it means for funding right now […] about what a reduction in funding would mean for their ability to have a career as a scientist.”

[Check out this interesting article on Challenge to Presidential Candidates: Debate about Science]
NASA
Trump has expressed support for space research: “Observation from space and exploring beyond our own space neighborhood should be priorities.” He believes that space exploration will promote interest STEM (Science, Technology, Engineering, and Mathematics) and will bring jobs and investment to the country.

On the other hand, he also criticized NASA by calling it a space program of a “third-world nation.” He also suggested that funding for space exploration would be less of a priority compared to other concerns.