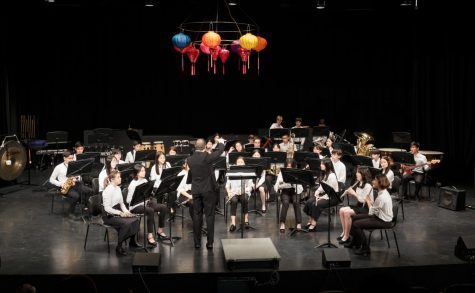 On November 3rd, the annual HS Winter Concert was a success. A variety of performances from different groups of student musicians were featured in the concert, and it delighted the audience on a Tuesday night.

The Grade 9/10 Band opened the concert, performing a piece called Night Journey by Chris M. Bernotas. It was a programmatic piece, meaning that it is a piece that has its own narrative. Night Journey successfully drew the audience into the concert by encouraging them to imagine their own unique narrative while listening to the piece.

Next came Daydreams by Brian Balmages and St. Thomas by Sonny Rollins. Doy Kim, a Grade 10 student in the G9/10 Band, noted that Night Journey and St. Thomas were both very energetic pieces. Kim said that the student performers really enjoyed practicing and performing the pieces.

After the Grade 9/10 Band performed, the Concert Band played their pieces. The band started off with a powerful piece called Amparito Roca by Jaime Texidor and continued the concert with a soft, quiet piece called Amaranthine by Julie Giroux. Then came Selections from UP by Michael Giacchino. “My favorite piece was the Selections from UP because Up is one of my favorite movies, and playing the music from the movie was a valuable and meaningful experience for me,” said Sophie Kim, a Grade 11 student who has played flute in the Concert Band for five years.

The next performance was the Show Choir and the Grade 9/10 Choir. The first piece sung by the Show Choir was Lollipop by Beverley Ross & Julius Dixon. The song consisted of a catchy, bright melody and was accompanied by HS Media teacher Jackson Garland on the double bass. Next came two pieces in which both songs had the word “lullaby” in their names, but had a striking difference in their moods. The second song, Seal Lullaby by Eric Whitacre, was a calm and smooth piece while on the other hand, the last song, Lullaby of Birdland written by George Shearing, was a jazzy and lively song that enlightened the atmosphere once again.

Similarly, the G9/19 Choir performed two pieces: Pure Imagination by Leslie Bricusse and Anthony Newley, and Bring Me a Little Water Sylvie by Huddie Ledbetter. The first one was a soft, pleasant piece while the second one was a powerful, amusing piece that was accompanied by the performers clapping along to the rhythm.

Last but not least came G9/10 Orchestra and the Chamber Orchestra. Starting off with an energetic piece called Night Shift by Richard Meyer, with powerful rhythm and interesting harmony created by the orchestra. They then performed the piece Music from La La Land by Justin Hurwitx, which was a medley of all the famous music from the movie La La Land, accompanied by HS Choir teacher Colette A’Bear on the piano.

The Chamber Orchestra performed three pieces: Divertimento K136 by Mozart, Plink Plank Plunk by Leroy Anderson, and Prelude from Psycho by Bernard Herrmann. “My favorite piece from all the three pieces was Plink Plank Plunk,” said Hee Su Park, a Grade 11 student in the Chamber Orchestra. “In this piece, we performed pizzicato all throughout the piece; it was performed in APAC by another school once, and it felt really new that we were performing the piece this time!”

Even though students and directors worked hard to provide the best outcome possible in hard situations, there were still special parts of the Winter Concert that were missed by participants. Doy Kim explained that due to social distancing restrictions, the different groups were not able to stay in the theater and watch the other performances. “It was a shame that we couldn’t watch other groups perform,” Doy Kim said. “As a performer in Concert Band and the Grade 9/10 Band, I’ve really enjoyed watching the Choir groups and the Orchestra groups perform.”

Overall, the HS Winter Concert was successful and rewarding. Students and directors were able to demonstrate their musical abilities and talents; parents and guests were able to appreciate the hard work everyone had done. Despite some limitations that were caused by the pandemic, the winter concert proves that UNIS will continue to work hard in order to provide important student experiences like the HS Winter Concert during these unprecedented times.