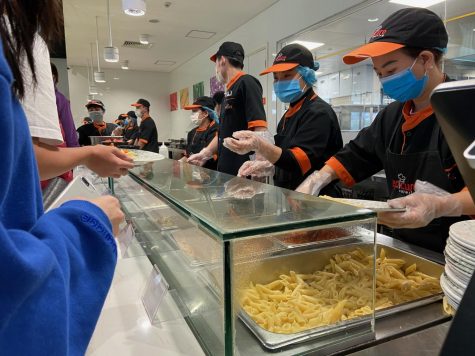 After almost two months of the canteen being closed due to COVID-19, the school administration made the decision to reopen it in late September. Given the fact that the pandemic is still ongoing, the administration had to make decisions regarding the precautions taken to allow the students to eat in the canteen.

Misty Shipley, the Director of Finance and Operations at UNIS, says that this decision to separate High School and Middle School was made so that if there was a COVID-19 case, only a certain group would need to quarantine at home, allowing the school to remain open. There are also government regulations about what can and cannot be allowed in this situation with COVID-19.

Even though students understand the necessity of this new schedule, there are still complaints. Alexandra Slewka, a grade 11 student, stated that she believes the main issue with this is that with the time being cut short, High School students barely have enough time to get their food, eat and get to class on time.

“Another problem with this scheduling, having High School students being able to eat in the second half is that a lot of us have SIP clubs or other agreements, for example service meetings or any other clubs during lunch and they need to talk with the teachers so that they can be allowed to go get our food early in order to attend these meetings,” said Audrey Hanson, a grade 11 student.  This is an issue because of the fact that the meetings which are organized for SIP clubs usually begin at the time when high school is allowed in the canteen. Even if the students can get their lunches at the canteen, they are not able to eat there, which is a problem because they do not have the time to bring back their plates or even eat before their meetings begin.

However, the complaints from students are not solely based on the lunch schedule. Many students have a problem with the plexiglass dividers on the tables in the canteen. “You can’t hear the person in front of you speaking because it blocks out the sound which results in a very loud environment trying to get your friends to hear you,” Slewka said.

These plexiglass dividers were one of the most important things in allowing students to return to the canteen as they shield students from bacteria coming from other students.

After discussing with the administration, the students have found that it is not likely that these safety measures will change any time soon, as they are necessary in order to be able to have access to the canteen. This is because there are government regulations, and so making changes would go against these. The regulations which the government has put in place since the beginning of the COVID-19 outbreak mainly regards public spaces. However, since these restrictions were instilled, there has been a lot of progress. Students do not need to wear masks in classes anymore.

We have been able to notice the way that these regulations are slowly becoming less and less restrictive, which gives the students hope that soon enough, we will be able to go back to the original lunch schedule.