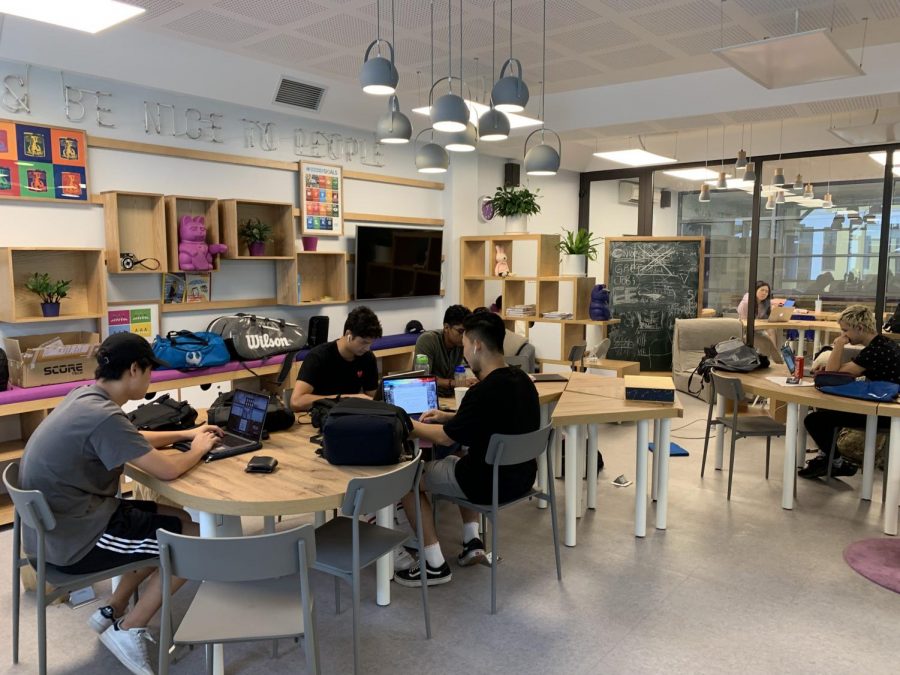 In the first quarter of the 2019-20 UNIS school year, high school students have been using the new HS common room for a variety of productive uses such as studying, relaxing, socializing, but this new development has been put into question due to the lack of responsibility some students have shown.

Have you bought anything from the food corner in the high school commons room? Eddie Lee, Grade 10, and Long Tran, Grade 11 started this social food experiment to observe the reactions of students when there is only a suggested price as opposed to a set price metric. “I started bringing in flavored powders to pour into water and share with friends and that’s where the idea of this experiment came from,” Tran said.

The concept of this experiment was created last year when students found the prices of the drinks in the cafeteria too expensive and decided to buy their own drinks instead. By recommending slightly higher prices for food and drinks than what stores sell them for, the students use the profit to expand the business and stock more food and drinks each day. “The money we were receiving was enough for us to buy the original amount of food and even more, which was not the results we were expecting at the beginning,” Jachym Jarkulisch, another Grade 11 student involved in the fridge experiment, said.

“Although the prices were only suggested and there were students who did not pay, I still paid the money so that the project could continue,” Grade 9 student, Haein Yun said. Despite this development, there were some serious incidents that should not be repeated.

Recently, students have been leaving food packaging behind and spilling drinks on carpets and sofas in the commons room. Unfortunately, the people who clean up the mess are the school cleaners when students should be held accountable for their actions. “Students should just be more aware of where they are eating or drinking and where the trash is left behind,” Tran said. In order to continue this experiment, the students should be respectful towards school property and thoughtful of where they are drinking or eating.

Snacks provided in the high school commons room should be bought while considering certain factors. This includes cleaning up after you eat, not spilling drinks on the furniture and reminding others if they are not doing the right thing. Furthermore, the high school commons rooms are rooms that have been selected in our campus for the HS students to be able to relax, study, and read. The rooms are provided for all HS students’ needs, which means the area is not for personal needs or activities. This underlines the fact that students were  asked not only to respect one another but also the given facilities.

As mentioned above, this issue hopefully does not happen again so that the experiment could continue on semester 2. “We hope that our experiment can last as long as possible and look forward to handing it over to other students in future years,” Lee and Tran said.