Food for Thought: Being Vegetarian 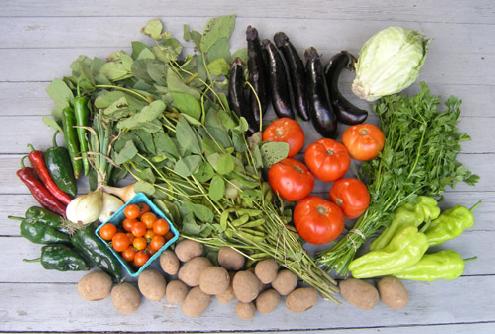 In a survey that was sent to all high school students, a grade 12 student responded to the question, “Why are/aren’t you vegetarian?” with: “We have so many delicious foods to experience through our life, I could not limit myself to solely vegetables.” I agree with half of this statement, we as humans have so many amazing foods to place our lips upon, and as a vegetarian you can do just this.

I’ve been vegetarian for two years now, and I wish I could say that it’s been longer. Within these two years, the most frequently asked question that I have received is: “So, why are you vegetarian?” My answer usually consists of several mumbles and sighs, but the simplest answer I can give is, “because I care”. In 2013, I stumbled across the documentary, ‘Earthlings’, Directed by filmmaker, Shaun Monson. The film exposes the suffering that animals endure not only in the meat industry, but also in factory farms, research labs, puppy mills, circuses and more. The film shows ‘behind the scenes’ of the meat industry particularly, and I refused to support that industry. After 14 years of being a self acclaimed “animal lover”, I needed to take action, I needed to practice what I preached. So, back to the infamous question, “why am I vegetarian?”

What differentiates us from animals? We are all living beings, we all share the right to life.
I cannot say that I am against the cruelty that is committed behind the closed doors whilst supporting it.
It is such a small sacrifice, to give up something that is a mere want, not even a need, in return of not supporting an industry that values the lives of human beings over other living beings, is so wrong.
The fact that we can live as herbivores, like myself, is proof that we were not specifically designed to eat meat, unlike some species such as cats, meat is not a necessary part of our diets.
Not only am I a self-acclaimed animal lover, but I also thrive for anti violence and this does term does not only include violence towards humans.
There are so many easy substitutes to meat; tofu, mushrooms, jackfruit, eggplant, lentils, beans, legumes and more.

When I first began the vegetarian lifestyle, I focused on eating healthily and making sure that I eat all of the food that I needed to be healthy and consuming all of the right nutrients. To do this, I did some simple research, and bought the food that would make sure that I do so. Enough about me. How can you begin your vegetarianism lifestyle? It’s so much easier than you think.

Being vegetarian saves a lot of money, we are so lucky to be living in Vietnam, a country where we could walk outside and see fresh fruit and vegetables being sold everywhere.

The global vegetarian community is growing so quickly, there are websites full of vegetarian recipes that won’t stand for your “I don’t like tofu or nuts” excuses because the vegetarian lifestyle is full of so many more options. What are the best foods for vegetarians?

For more specific meals, you can see my most recent blog post featuring three videos of some of my most frequently eaten meals, here.

Here’s what some other vegetarians in UNIS had to say about the lifestyle of vegetarianism:

“[I’m vegetarian because] of the health benefits.” – Maddie from Grade 11.

“My parents raised me as a vegetarian (no eggs, no fish/seafood, no meat). Before I was born my parents became interested in Eastern religion/philosophy, and though they fed me some chicken, fish, and turkey until age 6, after that we were strict vegetarians. So it was for philosophical reasons (not wanting to be a part of the killing and eating of animals), but also for health reasons. When I got older and then became an adult, I remained vegetarian simply because it was normal for me, I felt good, and I really had no desire to eat meat. In my mid-20s I added eggs to my diet and two summers ago I decided to eat fish/seafood for the nutrition benefits, not because I craved it. So now I’m a pescatarian officially. I’m pretty happy with my diet as it is so I don’t think I’ll ever eat meat.” – Mr Robinson

“[I’m vegetarian because] Ethics of the meat industry and health” – Catherine Hoang from Grade 12.

“I became vegetarian when I was 16. I chose to become vegetarian primarily for moral/social conscience reasons. It was a very easy decision to make. I hadn’t even been thinking about it for long. One day when I was in 10th grade I saw a news report about a chicken factory and pretty much decided then and there to stop eating meat. My mom thought it would last about two weeks, but it’s now been 25 years. It was surprisingly easy to give it up.” – Mr Garland

“I don’t support the way animals are treated for our consumption.” – Ilein Milena in Grade 11.

“In brief, I am a veggie for personal health concerns (a vegetable diet is a healthier option then a meat based diet) and the desire to lighten my environmental footprint (meat production is far more environmentally harmful than vegetable production).” – Mr Kennedy

“[I’m vegetarian because] because I believe it is a way of helping the environment. The production of meat uses incredible amounts of water and lots of meat is imported which pollutes the air as the transport is by aeroplane. The space it takes for the animals to be farmed is in many cases achieved by cutting trees and living space for wild animals and most importantly, the animals live in such terrible conditions, they are put full of chemicals to make them more filling, fatter, “better Quality” (even though if firmly doubt this)… I would rather eat vegetables that were organically cultivated or at least locally grown from the country where I am. I just feel better when I eat vegetarian because I do have a love for vegetables that definitely goes beyond the love I would ever have for meat.” –  Luna Vermeire in Grade 11.

Documentaries to educate yourself about the industries that perform cruelty towards animals:

For more information about vegetarianism, email me! Let’s grow this community and educate our friends.