The Dresscode Disagreement: Teachers and Students Share their Opinions 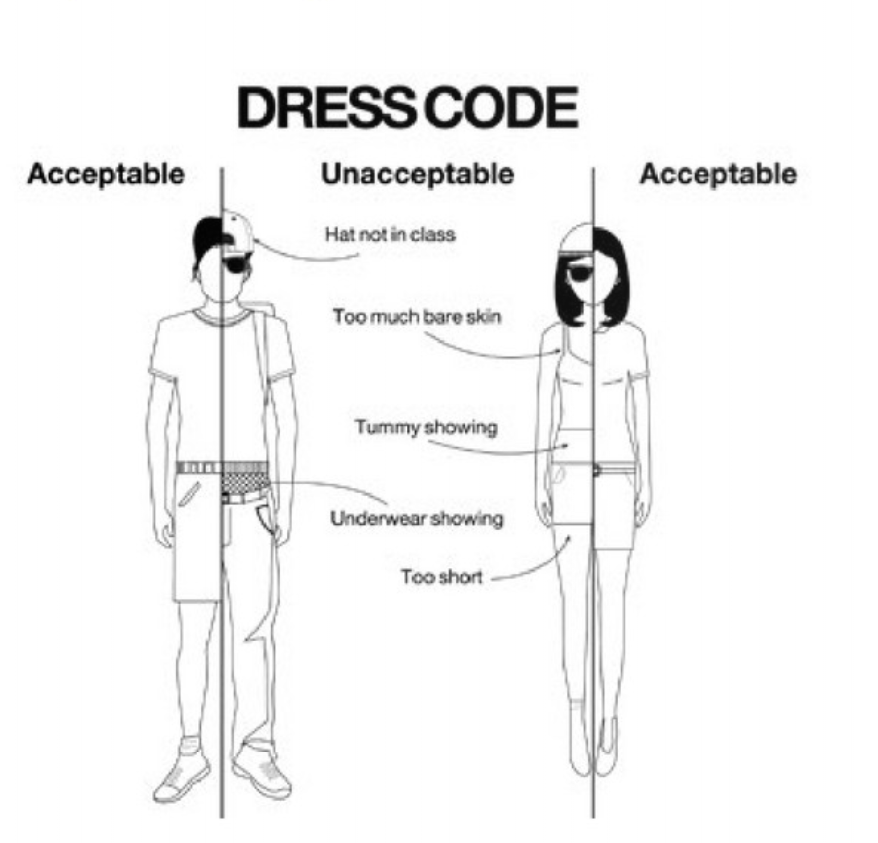 After the UNIS Senate made their announcement about the dress code during the first HS assembly, it received a negative reception from some students. The dress code was initially created in 2017 by a student task force consisting of both Senate members and various other HS students. Some female students believe that the current dress code is unfair to girls and think that it should be equal to all genders.

“Guys can take their shirts off when they’re playing sports and stuff like that, because I’ve seen that before on school grounds,” said Grade 9 student representative Didi Bullard, “but yet, when a girl wears spaghetti straps it’s like ‘Oh my god! You can’t do that!’”

Some students argue that a dress code is unnecessary, but Tanya Lee-Parker, an HS Physical and Health Education teacher disagrees.

“Especially in our school we need to be respectful of all religions, and that means that we need to dress accordingly and appropriately whether we’re boys or girls,” she said.

Lee-Parker said that it makes sense that girls feel more affected by the dress code, “because girls have a greater range of choice of clothes to wear, and boys tend to not wear strappy singlets or little tight shorts… but I think it’s just relevant to what girls wear as to what boys wear.”

Grade 9 student Audrey Hanson commented on her volleyball shorts, saying it wasn’t fair for her to be dress-coded on an outfit that showed shoulders, “when they put me in this skin-tight, butt showing spandex.”

“It’s the sport,” Lee- Parker said, “if you look at beach volleyball for example… the international volleyball confederation states that the bottom half of their two-piece can only have three centimeters of the pants so it comes from that.” However, she still agrees that the uniforms are a little too short.

The topic of the dress code has garnered enough feedback for the Dress Code Task Force to step back in and try to fix the issue.

“We heard that a lot of girls were getting called out during class by the teachers… and because of that, we felt like we were creating an environment that’s too restrictive.”

While students know that there needs to be a dress code, they also want UNIS to understand how hard it is to find the right clothes.

“When a girl walks into a store she’s not going to find trousers and a blouse,” Grade 9 student Solene Shelley said, “she’s going to find short shorts and a crop top. It’s so hard to find shorts that go down to your knees or to the appropriate length.”

One thing some people agree on is the inconsistency teachers have when dress-coding people.

“Some of the girls wear the same top from the same store, and just because of the varying chest sizes and their different shapes of bodies, whether they’re curvy or they’re stick thin, depending on that they’re getting dress coded,” Parvathaneni said. ”I think we should have clear guidelines on what is revealing in someone’s body and what is not.”

Another solution may be to create a school uniform, which would get rid of the dress code altogether. Lee-Parker agrees with that idea.

There have been many arguments over the dress code, but amid the differing opinions, teachers and students are both working hard to find a solution that benefits everyone.