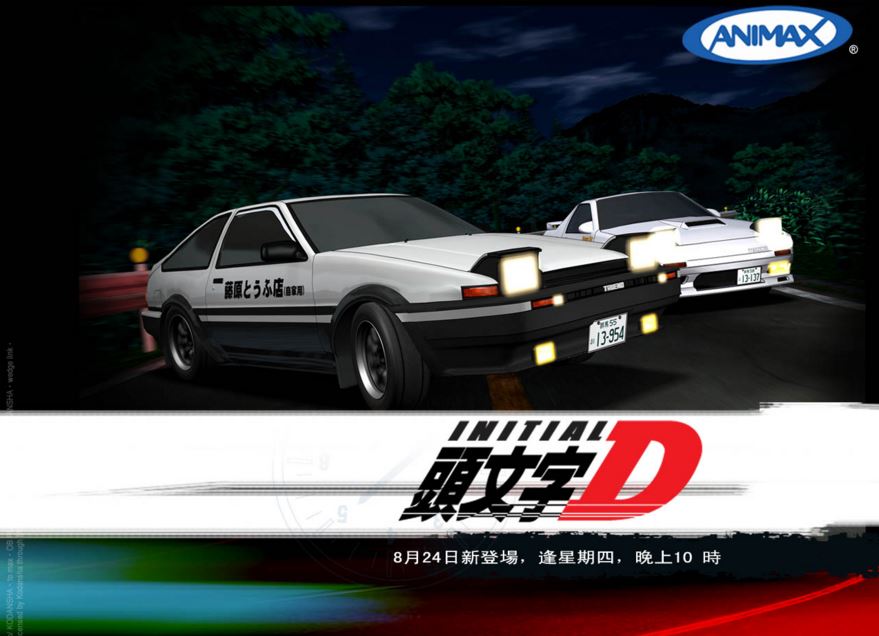 Fujiwara Takumi is just an ordinary 18-year old who can be best described as “blurred and spaced-out.” He doesn’t have any particular aspirations in life, nor does he care about anything in life. On the other hand, his father, Fujiwara Bunta, was once a famous street racer that drifted down mountains in his car the Toyota Sprinter Trueno AE86, or better known as the “Hachi-roku” in the show. However, he has since retired from his career and now runs the Fujiwara Tofu Shop. Since he is an extremely lazy and irresponsible father (in my opinion), he has forced Takumi to help him out with tofu deliveries (without a driver’s license) every night for 5 years ever since Takumi was in 7th grade. Since Takumi has driven on Mount Akina for 5 years, he knows the mountain like the back of his hand. So, he unknowingly becomes a master at driving and constantly challenges himself to drive and drift faster and with better technique so that he can come home early. When a famous racing team named the Red Suns come to their place, Akina, to challenge the racing team “Akina Speed Stars,” the team leader, Iketani, begs Takumi’s father to race for the pride of Mount Akina. However, Takumi’s father, Bunta, instead sends Takumi to race by bribing him (sort of), and thus begins Takumi’s journey as a street racer.

First of all, let’s talk about the story. The plot itself that I have described above is quite simple, as it is just about our main character Takumi versus various others racing against them. The format is that new characters (or opponents) are introduced and given an episode or two to display their exposition (or background). Unfortunately though, I didn’t find the characters that interesting at all. However, Takumi is a little bit different from most of the main characters as he is quieter and isn’t even interested in racing at all from the start. Itsuki however, is quite annoying and obnoxious, and is indeed only there for comic relief. And of course, since this is an anime, there are some high school romances as well. The most cringe-worthy one has to be between Iketani and Mako. Finally, there are some technical terms used in the show, which would be fan service to the car geeks but make absolutely no sense to casual viewers. Still, I think most viewers would gradually start to understand the terms used in the show.

Let’s start this section by talking about something I’ve never talked about – character designs. The character designs, while accurate to the manga, have rather odd proportions. Some of the examples include very long necks of many of the characters, thick eyebrows, and mouths that don’t even look like they are attached to the face. Still, after a while you’ll get used to it. For the cars, Initial D is famous for its CGI Cars. Now, while they could have animated the cars using traditional animation, I think it can be forgiven when you consider that even though its animation isn’t that high quality, it probably didn’t have a high budget to begin with. Still, considering it was made in 1998, they could have done better. However, it did work and make up for some really epic and exciting races.

As for the music, we have the highly upbeat music genre of Eurobeat. Produced in Europe, but released in Japan, this music really fits the anime and made a huge impact on the experience. In fact, it was because of the music that I decided to give Initial D a chance.

Now, I have to admit that Initial D was one of my childhood anime. I watched it as a kid, and from a bit of research, the anime is ridiculously popular in Asia. I mean, the Initial D live-action movie was even produced by a production company in Hong Kong, and the characters were speaking Cantonese. It has also inspired many people to become car geeks such as a Malaysian blogger named Hayashi86 and even own their own AE86, which by now is a 30 year-old car. However, I never completely liked the anime, as I didn’t “dig” the CGI appealing at all and I thought the cars moved too slowly.

However, in more recent times, after reading and watching a few other reviews, as well as listening to its Eurobeat soundtrack, I decided to give it a chance and watch the First Stage. I have to say that I was completely wrong about Initial D. While the CGI still isn’t very appealing to me, I still didn’t think it was that slow, and the Initial D series may have one of the better usage of CG, especially in the later seasons.

Overall, the characters in Initial D were good, but really nothing too spectacular. The street races, however, are intense and exciting and while the animation wasn’t the best, it worked really well. So, overall I did quite enjoy Initial D, and I will definitely be watching the next “Stages” starting with Second Stage.