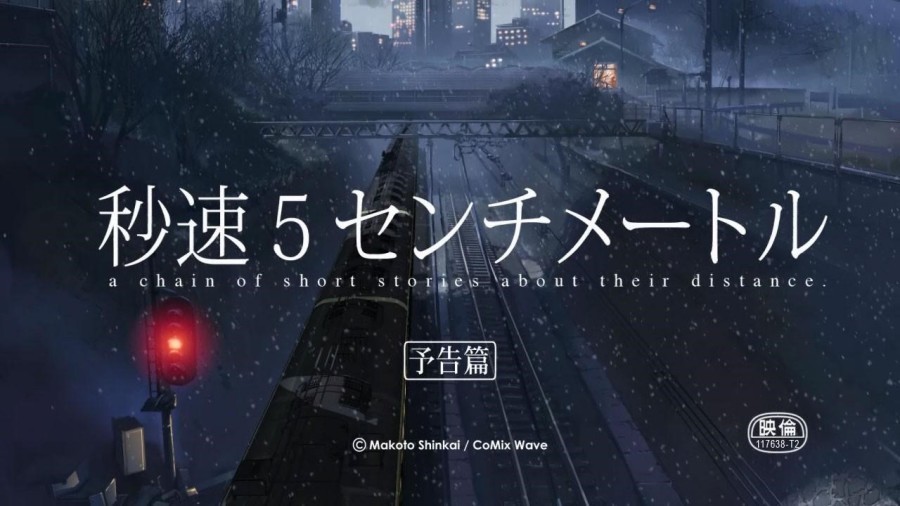 5 Centimeters Per Second is a one-hour movie directed by well-known director Makoto Shinkai. It is a love story between two characters – Tono Takaki and Shinohara Akari. When Akari transfers to her elementary school, Takaki quickly befriends her and quickly become become close friends. After they graduate from elementary school, Akari has to move towards the North of Japan in Tochigi prefecture of Japan because of her parents’ jobs. After she moves to Tochigi, Akari and Takaki continue their friendship by writing letters to each other. Eventually, the letters become less and less frequent as they start growing apart. Then, Takaki finds out that his parents are moving towards the South of Japan to Kagoshima prefecture and he decides to pay her one final visit before it becomes too difficult for them to meet again.

The plot that I have described to you is merely one-third of the story. Even though this is a singular movie, the story is split into three story arcs. The first arc is “Cherry Blossoms” and the second and third are named “Cosmonaut” and “5 Centimeters Per Second” in that order. Each story is not narrated continuously, and when transitioning to another part of the story, a title-screen appears to signal the transition. Luckily, these transitions do not feel abrupt as each story concludes before the next, giving us, the viewers, a sense of closure.

The first arc, titled “Cherry Blossoms,” constantly uses Cherry Blossoms as a motif and shows the initial beauty of Takaki and Akari’s friendship. We get to see them become close friends and grow apart when Akari moves to Tochigi. At the start of the movie, Akari says that cherry blossoms, or sakura (桜), fall at “five centimeters per second,” hence the title of the film. In Japanese culture, cherry blossoms represent the coming of spring and the beauty of life. However, after two weeks or so, the blossoms start to fall. This represents the short yet beautiful nature of life. The season for the bloom of cherry blossoms is known as Hanami (花見), where during the time of their bloom, many people sit under cherry trees and admire the short-lived beauty of these flowers.  In a way, the story is about how both of them start together and go their separate ways, whether it be by choice or not. The cherry blossoms symbolizes the short-lived yet sweet relationship between Takaki and Akari, and how their relationship “falls with the cherry blossoms.”

During the second half of the first arc, Takaki travels to see Akari for one final time before moving to Kagoshima. However, he chose the worst season to travel on train – during the winter. This is when Makoto Shinkai’s skills as a director and storyteller comes in. As their meeting gets delayed again and again, he uses this situation and excellent animation and music to show the thoughts of our characters, the despair they feel in their hearts, and tension. During the second arc we also see that Takaki has already moved to Kagoshima for some time. However, he is still longing for Akari. In this arc, we are introduced to a new character named Sumida Kanae. She becomes almost like the main character in this second arc, as she is shown and developed more than Takaki. She likes Takaki, but knows that he likes someone else. In the second story, we can see that Takaki always looks off to the distance at Akari. The main reason for their fading relationship is because of the second motif of the story – time and space. This is shown in the second arc through the slower pacing of the second story and the visuals. Time passes more slowly in the second story, whereas the first story had a sense of urgency and running out of time. This allows us to be able to feel the slowness of time and understand how their distance starts to make their relationship fade. Even though they long to be together, they are far apart from each other, and their relationship is strained by the unending flow of time.

For the third arc, however, I will leave it unexplained, as it’s the most emotionally powerful part of the movie, as the previous parts are built up to it.

The movie uses its visuals smartly to tell the story. The art style is realistic and detailed, but still retains a sense of fantasy. It shows the beauty of the surrounding world and shows just how vast our world is. The art style also changes from one story arc to another. For example, in the first arc, Cherry Blossoms, the standout imagery are the scenes with cherry blossoms and the snowy scenes when Takaki was travelling on train to meet Akari. Also, during the second story, the art style changes to fit the second theme of the story – time and space – by using the image of a sunset and space. As for music, almost all of them are beautiful piano pieces. The tracks do sound similar, because of the musical pieces are based on the ending song, “One more time, one more chance.” So, it gives each of the music pieces a similar sound and theme, which works well for the movie.

In the story, no matter how much Takaki and Akari care for each other, eventually, they have to leave due to larger circumstances, which they have no control over. Nothing lasts forever, time goes on, things fade away, and people you care about have to leave someday. It’s more important than ever to appreciate the present and spend time with your loved ones because you never know when they will leave. Once they are gone, all you can hope for is to meet again someday. Sometimes you will, but sometimes you won’t see them ever again. But, even when they’re gone, their memories stay, and that’s what made your time with that person worth it. 5 Centimeters Per Second is a film that presents us with a relatable and realistic view of love and relationships and how time and space can separate us from even the ones closest to us. Many of us can personally relate to the leaving of people that are close to us and that is what makes this film so emotionally moving and worth a watch.