“It Ends With Us” Book Review 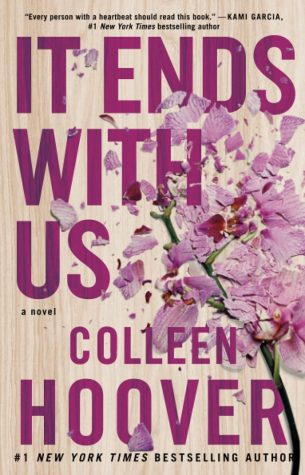 It Ends With Us is a romance novel written by Colleen Hoover which was published in 2016 but became very popular on the platform of TikTok in the year 2020. The novel tells the story of a girl named Lily who has recently moved away from her home in Maine to Chicago and meets a man named Ryle. The story develops as their relationship does, giving readers a glimpse into Lily’s past relationship with a man named Atlas who she dated for a year while she was in high school.

The book is addictive; it makes you never want to put it down. Not only because of Hoover’s writing, but also her page-turning storyline which is quite fast-paced. The entire novel is told through Lily’s perspective, which makes you feel close enough to her so that you live through every emotion and feel what she  feels regarding some of the traumatic events she experiences. Lily is a very likable and charming character who has strong opinions and always tries her best to do what she believes is right. In the novel, Lily faces a challenging situation as her boyfriend becomes abusive similar to the way her  father is abusive to her mother. As a child growing up in an abusive household, she had always told herself that if she  were ever to be in such a relationship, she would leave immediately. However, she struggles with leaving Ryle, her boyfriend, as she remembers the good side of him.As the abuse grows, she pushes her limits bit by bit. Throughout this novel, Hoover is able to make the readers understand the complexity of domestic abuse.She does this by letting us into the mind of the victim in order to show how difficult of a situation it can be, especially when the abuser is someone who you love.

The Invisible Life of Addie LaRue is a fantasy novel written by V.E. Schwab,published in October of 2020, and has gained a lot of attention since its release less than a year ago. The novel tells the story of Addie LaRue, a girl who makes a deal with a demon on the night she is  supposed to be wed. She exchanges her soul for the ability to experience life without aging or dying. However, she learns that there is a catch to this deal: she is cursed to be forgotten by everyone she meets.

The story-telling of The Invisible Life of Addie LaRue goes back and forth between the past and the present, each chapter in the past takes place on July 29th, 1714. Throughout the years, she forms a relationship with the devil who she’s made the deal with, and every single “entry” about her past reveals the development of their relationship. The present takes place in 2014, when she meets a man who remembers her.He is the first to ever do so.

This novel is very character driven, which means that the plot mostly focuses on character development by concentrating on how the main events of the novel affect the characters rather than putting all the focus on the plot. The story in this novel, on the other hand, is slow-paced: the first 150 pages feel more like they are an introduction to the story rather than being immersed in the main plot. Though there is a romantic aspect to the story, I would not consider this its primary genre. Even though the entirety of the novel is extremely intriguing and interesting, for me, the last 150 pages were truly the highlight of the story. The conclusion unfurls in a completely unpredictable way, but still manages to wrap up Addie’s story very well.