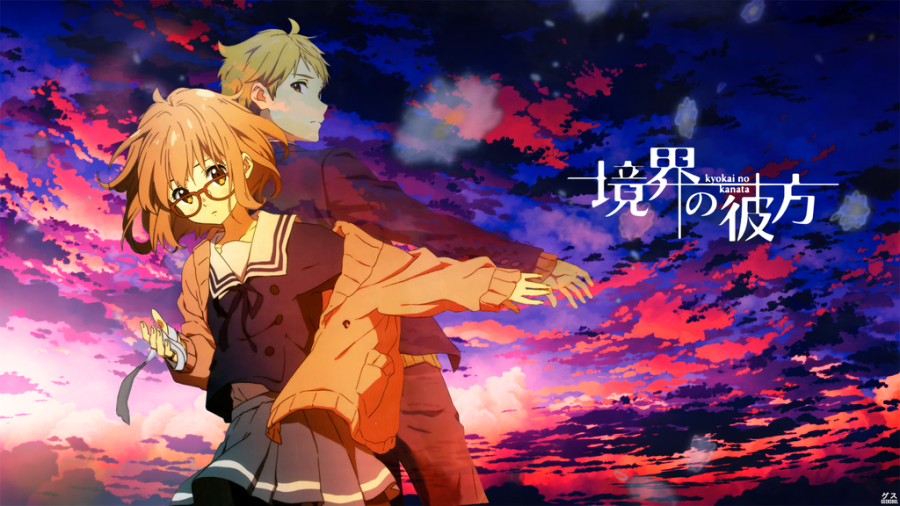 “Kyoukai no Kanata” is a 12-episode anime animated by Kyoto Animation. The story is set in a world of humans and youmu, monsters that stem from negative human emotions like fear or hatred. In this world, once youmu are defeated by the Spirit World Warriors, people gifted with special powers to defeat youmu, the youmu turn into stones and the Spirit World Warriors either keep the stones as a possession or sell them for money. In the story, we follow our main lead Kanbara Akihito, a rare-breed of half-human and half-youmu that has the power of immortality. One day, he sees a girl in glasses that is trying to commit suicide by jumping from the top of the school and rushes to stop her. However, once he got to the top, he is caught by surprise as the girl, Kuriyama Mirai, makes a sword out of her blood and stabs him. Since he is immortal, he survives the attack, and even though both Akihito and Mirai had quite an unpleasant first meeting, they eventually become friends. Story and Characters Akihito himself is a likable main character. However, since Akihito is a half-youmu, when he is heavily injured, his youmu side takes over and goes on rampage and therefore throughout his life, he has been viewed as a monster by many others. Even though he tries his best to suppress the youmu within him, he still has done many regrettable things in his life, even though he didn’t mean to do them. And that’s why, he doesn’t want to be viewed as a monster, but as a human. He also feels that he is an outcast and still lives with a sense of guilt and regret because he is different from everyone else. Our female lead character, Kuriyama Mirai, has a similar predicament to Akihito. She is the last descendent of the Clan of the Cursed Blood, a group of Spirit World Warriors that can manipulate their blood and turn it into weapons. Throughout history, her clan has been shunned and killed off not only because their unorthodox ability is looked down upon, but also because they were one of the most powerful groups of warriors, and other warriors did not want them to gain power. Throughout her life, Mirai has also been rejected and seen as a monster for possessing such powers. She also has her own past and regrets to deal with, and believes that she should be alone because she feels like an outcast. Since both Akihito and Mirai are so different from everyone else, they start to become friends and grow closer to each other. They find acceptance and happiness in each other, and as Mirai puts it, they feel comfortable when they are together since they are so different from everyone else. The interactions and development between these two characters as they start to accept and appreciate themselves for who they are is a rewarding element of the show. The main message of the show is to appreciate someone for who they are, not what they are or where they came from, and to be close with the ones you care about. This is also the main driving force for our two lead characters. As for the supporting characters, there aren’t many to choose from. The most prominent ones are Hiromi and Mitsuki Nase, the brother-sister duo who, while not as developed as our main characters, they are still very likable characters. Mitsuki is the younger sister, who supports the main leads. Hiromi is the older brother, who works hard and strives to be as good of a Spirit World Warrior as his sister Izumi. He’s also a quite weird person when he’s not in action and he randomly likes to wrap his hands around Akihito’s waist for no reason. And while we are talking about the humorous aspects of Hiromi, we should also talk about some of the more lighthearted moments of this anime. This anime is set in high school and is almost like a slice of life anime as there are many “normal life” and funny moments in the show, and there are also some Moe, or “cute girls doing cute things,” elements, more specifically with Kuriyama. So, while the high school setting and cute moments of the show may turn some people off initially, if you continue watching, the best part is that it makes the show more relatable so that you can connect with the characters and care for them more. In terms of the ending of the anime, I wouldn’t say its the type to make you feel unsatisfied and crave for a second season, but it actually makes you feel good as it leaves you feeling satisfied but also a little curious.

Sound and animation In my opinion, some of the soundtrack during the battle scenes and dramatic moments were epic, however overall I wasn’t too impressed. However, the animation deserves a lot of recognition for its high quality and amazing production. Kyoto Animation has been known for their detailed and smooth animation, and has proven this through popular shows such as “The Melancholy of Haruhi Suzumiya” and “Clannad”. Thus, they have managed to deliver once again. I would say that the overall highlights of the show are the fight scenes, which are well choreographed and look very fluid and detailed. Conclusion In my opinion, Kyoukai no Kanata exceeded all of my expectations. The show consists of a great balance between the Moe/high school scenes as well as the action and dramatic ones. Kyoto Animation has never been known for their action shows, since most of their shows stick more closely to the are of the Moe genre. However, I’m impressed that they managed to pull it off by having excellent animation even when this type of show isn’t their forte. The show surprised me by turning to a much darker direction halfway through, and gave us a great, sophisticated story in the end. I would also recommend watching “Episode 0: Shinonome,” which is an episode of an event mentioned in the show but never shown. However, this episode contains a lot of spoilers and should be watched only after Episode 10.