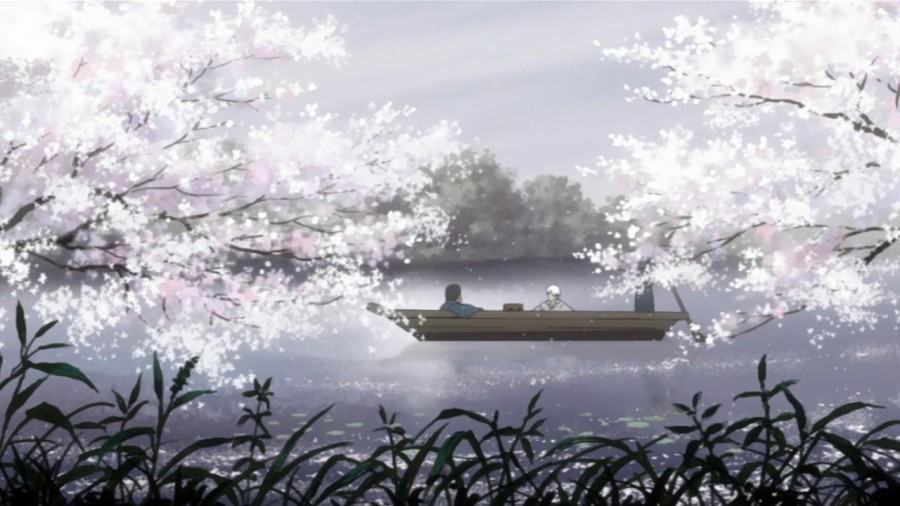 “Say these four fingers are animals, and my thumb is a plant. Man is here, furthest away from the heart, at the tip of the middle finger. The lower you are on the hand, the more primitive you become. If you trace them, the veins all converge around the wrist… Up the arm, past the shoulder, and here are the Mushi, or as others call them, the Midorimono.” – Ginko

The world of Mushishi isn’t some fantastical and wonderful world that you would like to live in. It is similar to our world but with spiritual and mystical elements in it. Each episode shows us how Mushi have affected people’s daily lives and presents us with interesting views on life. It may be taken as a quiet, calm and an ambient show, but the messages and themes about life are usually quite serious. The show, Mushishi, can actually be described as a dark show that shows the realities of life. Many shows try to portray their stories with a dark theme through blood and violence, but lack an effective message that is able to impact the audience using the characters.

Watching Mushishi is a calming yet powerful experience. The show’s story and experience is unlike any you have experienced before. Mushishi tells its story through a combination of meaningful and well-written stories and beautiful artwork that sets up a quiet and calm atmosphere. Unlike most anime, Mushishi is an episodic anime, meaning each episode is its own individual story that concludes at the end of the episode. You could say that it’s like a collection of short-stories, but all of them are connected to each other which allows you to connect things you’ve learned from one episode to another.

Ginko, the main character, is a Mushishi, or a Mushi master. Throughout the story, we see Ginko as he travels from place to place to help people whose lives has been affected by the Mushi. Mushi translates to “bug” in Japanese, but that’s not exactly what they are (even though many of them do look like insects); they’re more like spirits than insects. Mushi are the most basic forms of life, and they coexist with plants and animals, and rely on them to survive. As they are a completely different form of life than humans, many people cannot see them. But they are completely tied to us and affect us in many ways, whether it be good or bad.

Many anime series choose not to use a episodic format, or give a new story to each episode, and instead choose one overarching storyline that carries through a season or two. However, in the case of Mushishi, due to the nature of its stories and how Ginko travels from place to place to help people, the episodic style of storytelling works wonderfully. Each of the episodes are beautifully written, and contain a deep message within. Of course, the credit also has to go to the manga itself for coming up with these breathtaking stories, but the anime has done a great job at revealing the stories in such a short amount of time. Each episode concludes wonderfully after twenty minutes or so, and does not leave the viewer hanging but wanting more.

Moving on to Ginko; Ginko is a calm and reserved main character, with a slight sense of humor. We don’t know a lot about him, but we know enough. It’s hard to describe, but we are better off not knowing too much about him as many parts of his character are left open and vague. He’s not an empty character, but the show chooses to leave much of his personality out. While this may make Ginko appear as a  character that isn’t well developed, it allows the viewer to put some of their personality into Ginko. As Ginko travels around and solves the mysteries of the Mushi, the choice to leave his personality open allows the viewer to feel like they are a part of the story. This makes the viewer feel more immersed in the show, and feel like they are solving the mysteries along with Ginko. Even though the show does not go into detail about him, he still is a character that the viewer can genuinely connect to. It feels like he is going through the same thing as you, looking at the situations and determining which Mushi is involved and how to overcome each obstacle. You feel the relief that he feels when he resolves a problem and you feel his anguish and pain when he fails to too.

Although, Ginko’s character may lack detail and is open for a bit more interpretation from the audience, Ginko still manages to come across as feeling like an actual person, rather than just a blank slate for the viewer. He maintains a calm and forgiving attitude while doing his work, which is expected since he is dealing with the sometimes problematic supernatural. All he wants is to resolve the conflicts between human and Mushi and help them both to exist in harmony. He believes that Mushi are neither good nor evil and that they are living beings, just like all of us even though sometimes, their way of living may conflict with the human way of living. As his mentor, Nui, once said: “Don’t let yourself be blinded by fear or anger. Everything is only as it is.” People should not think that Mushi are evil, because they just want to live like humans do.

It’s these things in Mushishi that makes this show such a memorable and meaningful show. Mushishi draws much influence from traditional Japanese folklore, myths and legends to create a unique experience. Even the manga artist, Yuki Urushibara, says in the volumes of the manga how her drawings come from daily-activities from her own life and stories she has been brought up with from people like her grandmother. 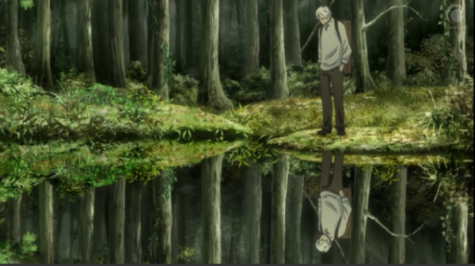 Mushishi’s animation is done by Studio Artland, who has also done the Legend of the Galactic Heroes series, though that may be a bit too dated for comparison. However, the art and animation was still done wonderfully. The animation, admittedly, doesn’t have a dramatic effect with large movements on screen because the animation for the moving objects are more fluid-like and smooth. One can tell that a lot of work and effort was also put into the background art from looking at the level of detail and colour in the background as it makes the background seem alive. The background art really sets the tone and feel for the series as a whole, and it looks spectacular. It truly makes me wonder why other anime don’t have backgrounds that are as detailed and as beautiful as these. The background successfully sets the atmosphere of the show and makes the viewer feel immersed in the calm and natural world of the show.

The music of the show is also very unique. The instruments used are traditional Japanese instruments, which really fits the time period of this show (ancient Japan). I personally really enjoyed the music and thought it was a great fit for the show, as there was a mix of melancholic and sad musical pieces. While listening to the soundtrack, I realized just how touching and emotional it sounded to my ears. An interesting thing to note is that each episode has a different ending, which I feel reflected the mood and atmosphere of each episode.

As a whole, Mushishi is a beautiful combination of storytelling, animation, and music. The combination of these three elements create a calm and immersive world. It is not the type of show that has an exciting story with a setting on a grand and epic scale. And while these types of show are great as well, Mushishi draws you in instead with its relaxed and tranquil world. It’s almost like nourishment for the soul. It shows you to the natural beauty of nature and the world around you and how we should coexists with nature rather than live against it. The best thing about the stories is that even though it is very quiet, yet very meaningful. It doesn’t shove its message in your face, but encourages the viewer to think about it.